This best describes the week end of qualifying and eliminations at Raceway Park for this team.

I am sure you all would agree that we all thought this race was going to be an all-out battle between ALL of the usual 3/4 chassis Modified cars, what we all thought would include the field from PR plus Bret’s FAST Mitsubishi. My expectation was that there would be the closest competition in our class to date and records would fall. My personal expectation was to run a 7.25 consistently because I knew the air would be good and the track would be as good as it had been in years past. I had a FRESH bullet under the hood and was ready to “do battle”. 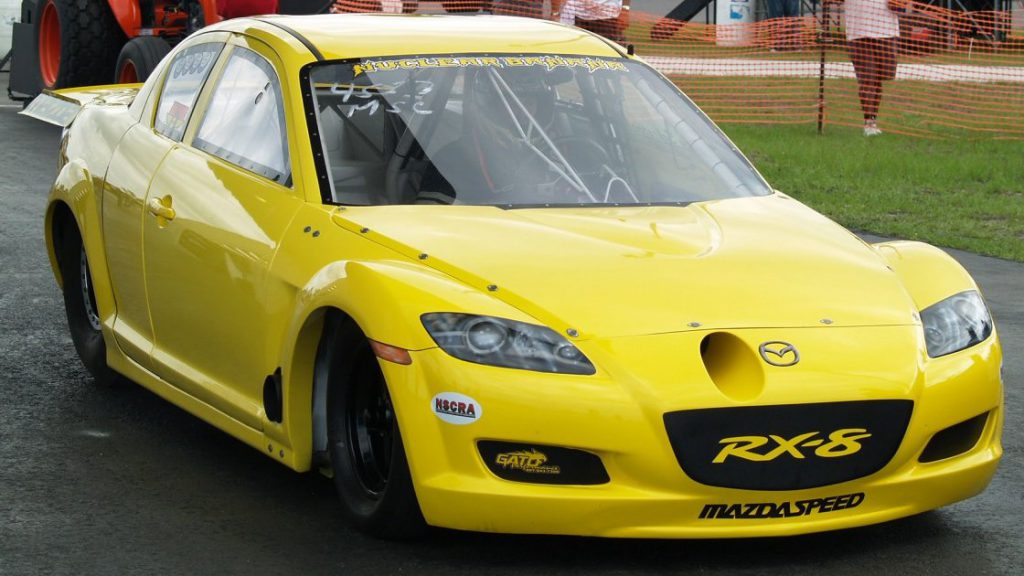 First round of qualifying in the right-hand lane was not good! As soon as the tree fell, and I let the clutch go, I headed toward the wall and shut it down. Not a good start for the week end! The groove was narrow and VERY SLIPPERY, and the data revealed huge wheel spin. What happened to the track?

For the second round, I thought I would do better as all of the previous round top qualifiers had been in the left lane. With more power than I had in Richmond, I anticipated a solid run with less clutch due to the track conditions. My goal was a 7.5 No sooner had I dropped the clutch, the car steered toward the center, so I corrected to get back into the groove then next thing I remember, I was headed for the opposite wall in a hurry. Without letting off the gas, I thought I could save the run but that was not to be. All of a sudden, I was completely sideways so I stood on the brakes and attempted to correct my direction which at this time was straight for the right-hand lane wall. A place I have visited once before in 2004.

My road racing lessons flashed through my mind and instinctively did what I was taught in this situation. With the inside of the car filling with tire smoke I remembered that I needed wheel rotation to steer the car so I eased off the brake just enough to be able to turn the opposite direction then the back of the car was rapidly approaching the wall and I prepared myself for the impact. Again, a flash in my mind said’ ” here we go and this will be the end of this car” but I can only assume the Lord was watching over me because the next thing I remember as I was backing into the wall was the soft impact of what I thought might have been the wing which “kicked the back of the car around just enough for me to gain control and steer it back over the 1320 cone and stop. What had I done and what damage was done? I was so angry with myself, I put it back into first gear and proceeded down the track to the first turn out and drove onto the scales disgusted with myself.

When I got out of the car, the first thing I did before anyone showed up was survey the damage. To my surprise, the only damage was to the wheelie bars. They were bent  but there was no other damage. I can’t begin to tell you how relieved I was and looked up into the blue sky and thanked the man above for saving me and my car.

By this time, the track officials and my crew were asking how I was. I was OK and remember say to the track guys, “I hit oil or something, something was on the track”. There was nothing on the track. It was driver error, plain and simple especially after I walked the track on Sunday morning prior to the third round of qualifying and saw my tire tracks. Clearly, I had gotten out of the groove twice and paid the price. The skid marks across the center line form left to right were the 106 inches of wheel base. In other words, the car was completely sideways sliding at least 140 mph. How I saved the car is beyond me. I was very lucky to say the least!

With the evening to “repair” the damaged wheelie bars, we were weighing our options and thanks to fellow racer Manny Cruz for offering to loan us a set from his car. Although the bars were shorter than the ones I use, we had the lower bars from Manny, all we had to do was shorten my original upper bars to match the loaned set. Again, I owe many thanks to Tito for taking charge and cutting and welding the upper bars and setting up the “temporary set” , rotating the flat spotted tires in preparation for Sunday morning’s 3rd round of qualifying.

With the temperature still very cool, the density altitude was minus 480 below sea level. You could not ask for better conditions to make big power. Unfortunately, the track was also cool so I decided to turn the boost down so I could at least get down the track. So with reduced power and the shorter wheelie bars, the car launched, did a huge wheel stand, shook the tires and in the end, I improved my qualifying time and felt better because I knew that for eliminations, the track would be warmer and hopefully had a little more grip. Qualified #5 with and ET of 8.398 seconds  @ 168.53 MPH

My first round would be against Luis in his Toyota. Once I left the line driving through the clutch, I did not see him and was pleased with the win. This meant I would be in the semi final, another round which means more points. All I had to do was get by Brett Rau!  RT 0.137      ET 7.531 @ 178.05   Video

Between round maintenance was done thanks to Victor & Edaurd and some enthusiastic fans. We had to install new clutch discs and had to add counterweight to the clutch set up and I had to take a chance and put the boost setting back to normal and add fuel to the map if I was to have a chance in the semi. With a plan in mind, I was ready for what would be a good round of competition.

Following the burn out, I set about sticking to my “plan” and staged. I was on the 2-step for almost 7 seconds before the tree fell and we were off. I was first out of the hole but it didn’t last too long and Bret went by me before the 1/8th mile marker like I was going backwards. At the end of the run, I saw smoke and smelled oil and thought I had blown the motor. Not so. Following some clean up and searching for the typical cracked housing and could not see any cracks we found the oil filter had worked itself loose and consequently it just pumped all the oil out of the pan.

With the semifinal loss, I still managed to gain valuable points and end the day way better that I expected, particularly after the disastrous qualifying, a spin across the track which could have destroyed the car and driving the car with what was a totally different set up because of the wheelie bar length difference. I can assure you that I learned a few very valuable lessons this week end.

I am not sure what I can do, if anything about overcoming the distinct disadvantage I find myself in, in the class. My goal is to win the championship, so I will just have to do the best I can and I certainly realize that in racing, anything can happen. I just have to stick to my original plan of being consistent and hope we can go rounds to accumulate the points needed.

Next stop is Lakeland, Florida for some 1/8th mile match racing on May 20th.

After that, it’s back to New Jersey for the Atco Race. See you then!